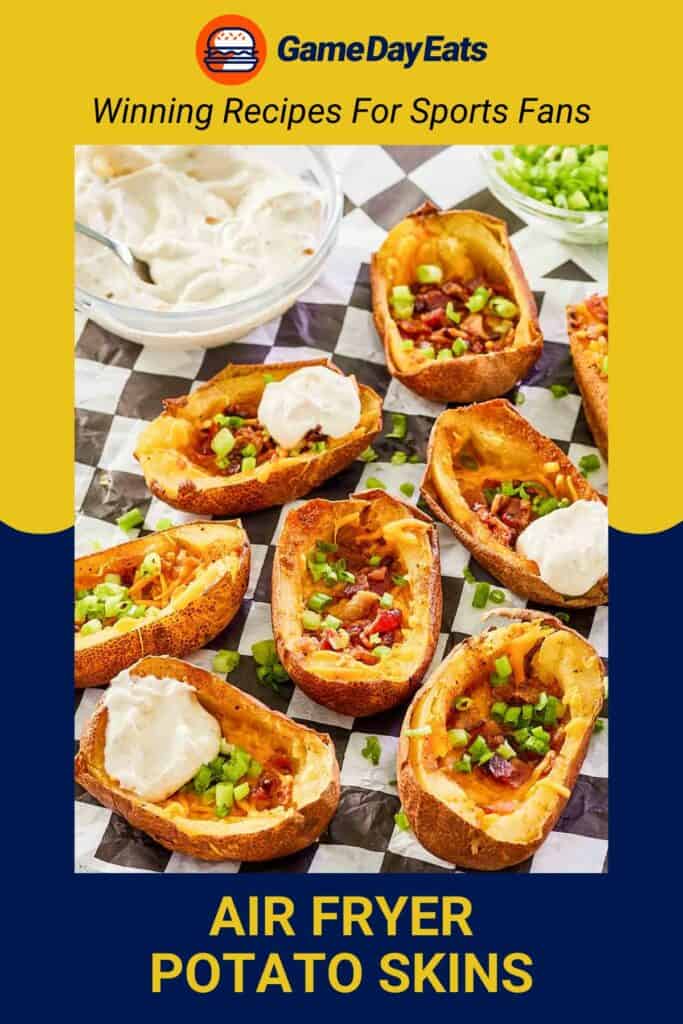 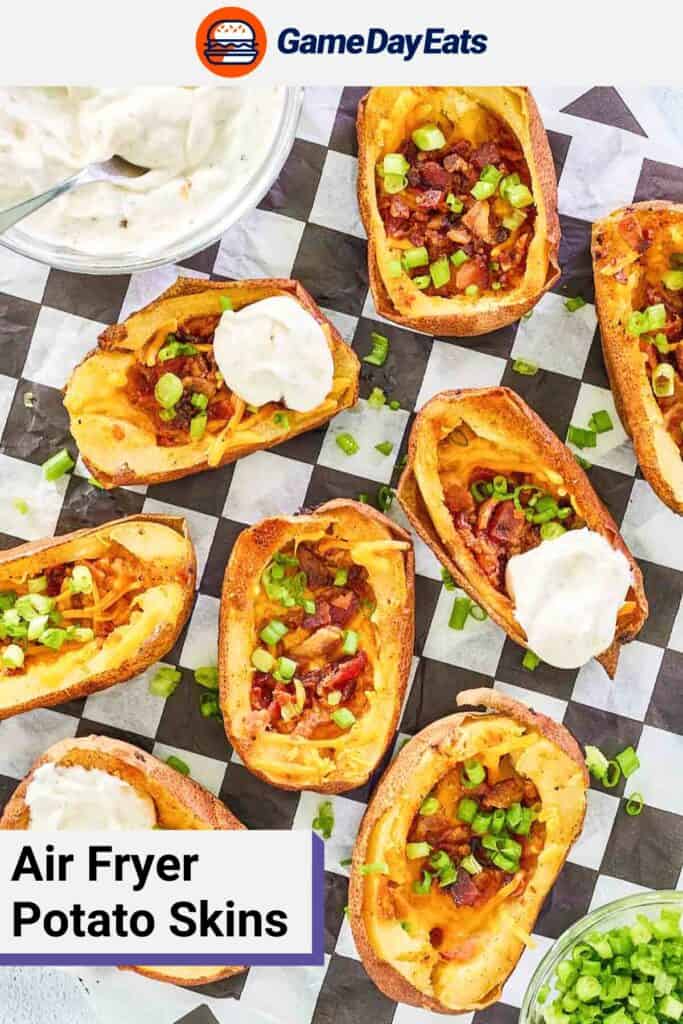 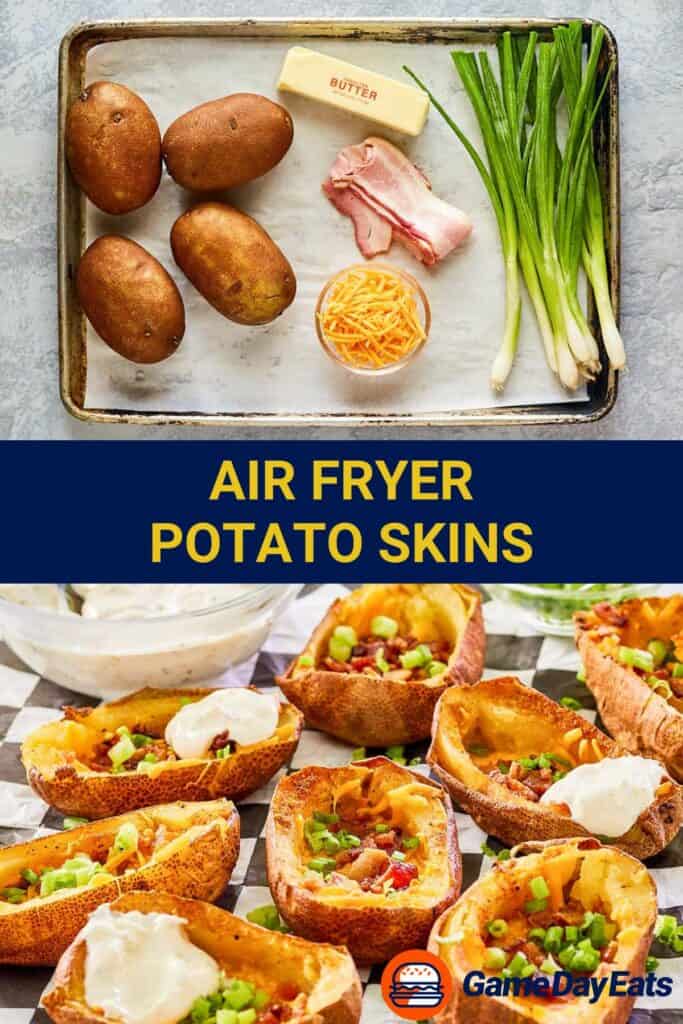 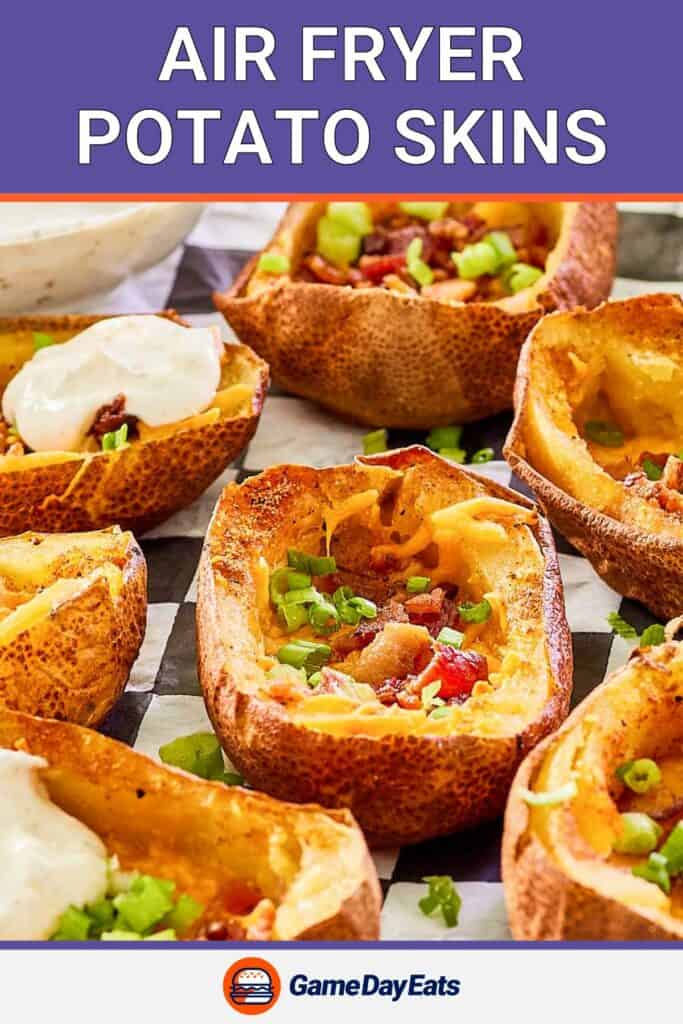 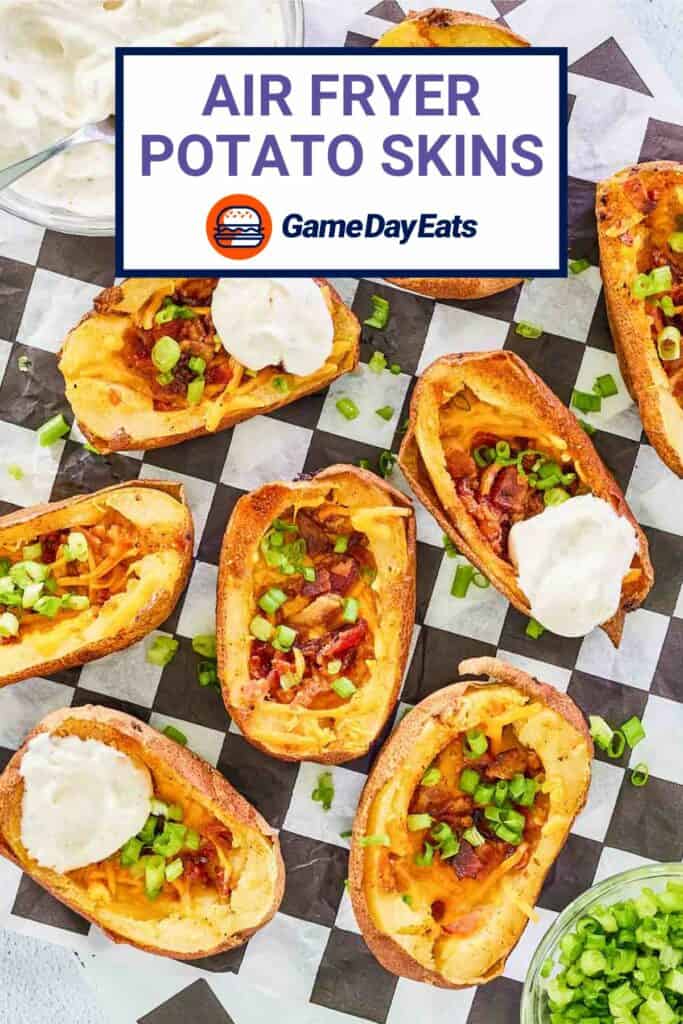 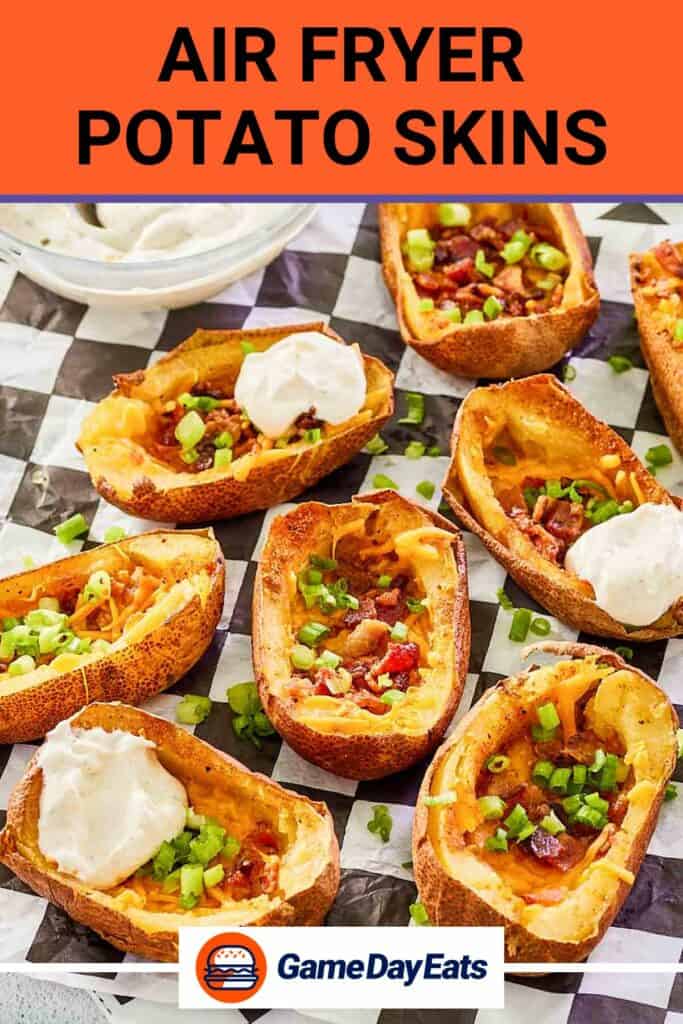 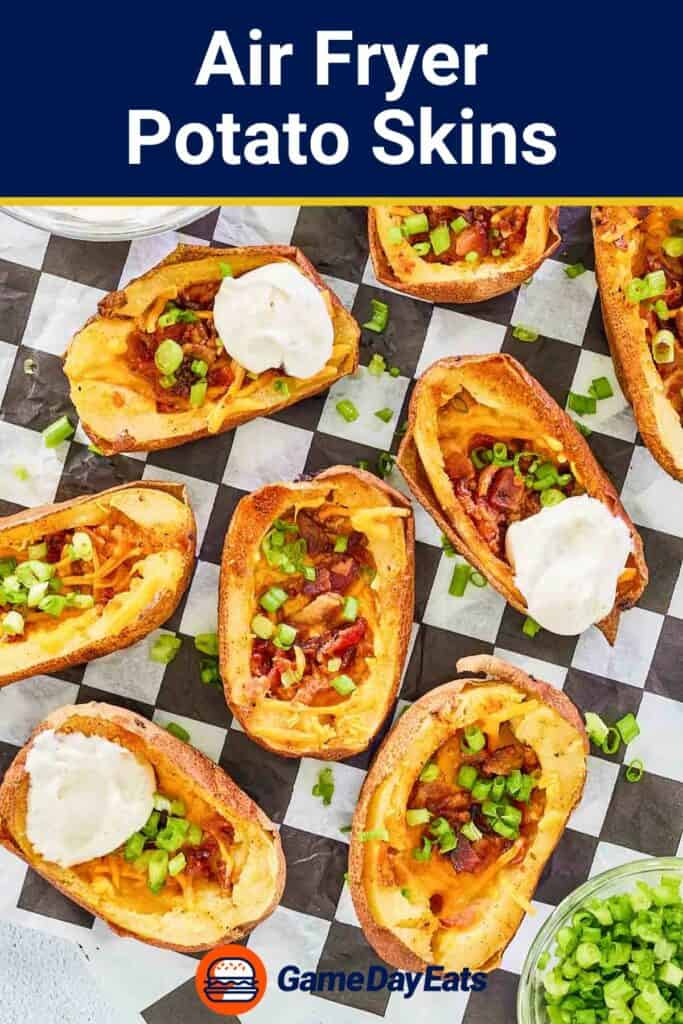 Air Fryer Potato Skins are a tasty appetizer and great for game day. These crispy air-fried potato skins with butter, bacon, cheese, and green onions are served with a homemade sour cream ranch sauce for dipping or topping.

This post contains affiliate links. As an Amazon Associate, I earn from qualifying purchases.

Watching sports at home is an excellent excuse for (over)indulging in your favorite snacks. And perhaps the ultimate game day snack is loaded potato skins.

Potato skins are hot, crispy, and much more satisfying than potato chips or pretzels. Make a double batch to ensure you won't run out before halftime.

Making loaded potato skins from start to finish in the air fryer is a time saver. Besides the convenience factor, the potato skins reach an almost french fry level of crispiness that is impossible to achieve in most regular ovens.

Stuff these crunchy skins with your favorite fillings for fun finger food that is easy to make and incredibly satisfying to eat.

To save time and avoid making a mess, you can use packaged bacon bits instead of cooking the bacon yourself. Seasoned salt is a blend of table salt, spices, herbs, and other seasonings. Use your favorite brand, or try Lawry's Seasoned Salt. For the dipping sauce, you'll need:

Reduced fat sour cream will work in the recipe.

How Long To Cook Potato Skins in the Air Fryer

The initial cooking time for the potatoes depends on your air fryer and the size of your potatoes. A rough estimate is between 30 and 45 minutes, but it is best to test the potatoes to ensure they are cooked by sticking a fork in them. A properly cooked potato will offer little resistance.

If you are a perfectionist, you can use an instant-read thermometer to check if the internal temp has reached at least 210°F.

After filling the potato skins, you want to air fry them just long enough for the cheese to melt, about two to three minutes.

Loaded potato skins are all about versatility, and endless possible filling options exist. Here are just a few options for you to try, but you can come up with your own combination of ingredients:

Equipment You Will Need

To make the crispiest potato skins, you'll need an air fryer. If you don't already have an air fryer, you can find many models for under a hundred bucks.

If you really love loaded potato skins, you may want to pick up a potato scooper to make hollowing out the potato skins easier.

Just about anything goes well with potato skins. If you are not serving the skins as appetizers with the dipping sauce, potato skins make an ideal side for steak or BBQ chicken.

A loaded potato skin or two can turn a bowl of soup into a complete meal.

If you are wondering how long to cook frozen potato skins in air fryer, the quick answer is about 7 to 8 minutes. But things can get a little more complicated depending on several factors, such as the size of the potatoes, the toppings you use, and your air fryer.

To avoid burning the toppings, check the skins after five minutes to see if they are hot enough for you.

To reheat frozen potato skins in an air fryer:

Are you planning a party or just want to have a quick and delicious snack ready to go? You can freeze potato skins and reheat them later. Here are a few suggestions to get the best results: 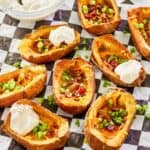 Hi, I'm Stephanie! I love to cook and share my recipes with all of my viewers. I want to inspire people to cook at home and make great memories of sharing meals with their friends and family